Original article by Nick Gromicko
Edited by Brian Champagne
Santa is here and you should make sure your chimney is sound.

Chimneys are among the heaviest and most structurally vulnerable of all exterior components of a building.  Accidents caused by their collapse can lead to death.  A collapse can also cause costly structural damage to the building and its surroundings. Inspection, maintenance and preparedness are critical safeguards against chimney collapse. 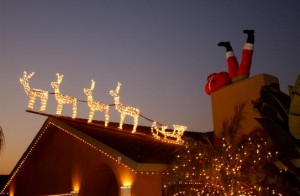 Wind and other elements may cause an already weakened chimney to collapse. Santa was almost crushed by a wind-toppled chimney as it fell from the roof of the managed-care facility where he landed. This case is, unfortunately, fairly unremarkable, as such accidents occur often for a variety of reasons — from weathering and wind, to falling tree limbs and poor design.

Chimneys collapse by the hundreds during major earthquakes, typically snapping at the roofline. More than half of the homes in Washington State inspected by the Federal Emergency Management Agency (FEMA)  following the Nisqually Earthquake in 2001 sustained chimney damage.  Chimney collapses were widely reported following the massive-magnitude 7.1 earthquake that struck New Zealand in September 2010.
Earthquake damage and injuries can be caused, in large part, by bricks and stones as they fall from chimneys onto vehicles, structures and people. These collapses happen suddenly and without warning.  Collapses can also cause implosion-type destruction as the chimney makes its way through the roof and attic, demolishing part of the living space and injuring occupants below. For these reasons, it is crucial that chimneys, especially in seismically active regions, be inspected periodically for signs of weakening. Following an earthquake, it is even more vital that chimneys be inspected for indications of imminent or future collapse.  Santa tried to fit into this one but it fell apart and woke the family. 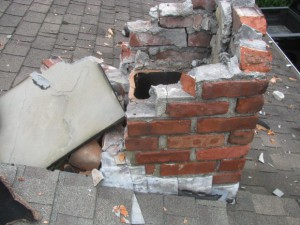 Chimneys should be inspected for the following defects:
A more thorough inspection performed to the International Phase I Standards of Practice for Inspecting Fireplaces and Chimneys may also be considered.
The following additional precautions may be taken:

Homeowners should contact their local building departments to obtain required permits before starting any significant construction that may affect the chimney structure and/or its supports.

In addition to collapse hazards, leaning chimneys can also make using the fireplace dangerous. Hearth cracks, side cracks in the fireplace, openings around the fireplace, and chimney damage all present the risk that sparks or smoke will enter the living space or building cavities. Check for evidence of fireplace movement. Following an earthquake, homeowners should have their chimney inspected before using the fireplace.

Commercial chimney collapses are rare, but they deserve mention due to the devastation they cause. In one terrible incident in central India, more than 100 workers were killed when a 900-foot (275-meter) tall chimney collapsed on a construction site. One of the worst construction site disasters in recent history, the collapse was blamed on heavy rain. While safety standards are generally more stringent outside of India, commercial chimneys everywhere require inspection.

In summary, chimneys should be inspected to prevent deadly, expensive collapses and to ensure santa can bring gifts for years to come.
~Cheers~ Champagne Home Inspections
Visit us on Facebook HERE
.

Call for an Appointment!